«A» AS ATEROID AND A PROPHECY OF RASPUTIN ABOUT MAN

Publicado en 12 julio, 2011 por Filippo Bongiovanni Publicado en Científicos, Epiritual, Sociales y globales
BY THE WILL OF THE ONE WHO GUIDE MY STEPS

I have been invited by listeners of our program, that every Saturday is transmitted in Argentina, to unite the catastrophic event of the asteroid and the prophecies of recent times … On several occasions I have spoken of this event, from the earliest numbers in the publications through the official organ of EUGENIO’s WORK throughout the world … LUCIA DO SANTOS for what regards FATIMA, and all the other protagonists of this event, from MONS.LORIS CAPOVILLA Secretary of POPE JOHN XXIII true connoisseur of the message, he read it. THE CARD.SILVIO ODDI then President of the C. E. I.  has deep knowledge of the Message, he read it. MONS. CORRADO BALDUCCI profound connoisseur and fervent supporter of the presence on earth of beings from other worlds and who linked to the events of the two suns of FATIMA. MONS. STANISLAW DZIWISZ, today CARD. Secretary of POPE JOHN PAUL II were all contacted due to the seriousness of the events that would had hit mankind. The indications and the provisions to be send by EUGENIO for all these players were clear and unequivocal, as well as for CONCHITA GONZALES, the SEER of San Sebastian of GARABANDAL -Spain-, linked to the events of the VIRGIN MARY’s  aaparitions, who had appeared to her and her other peers in the 1960s. I spoke personally with her, after which she received our letter, where we called with a precised will of EUGENIO to take seriously the danger in which the world was. She didn’t payed much attention as also had happened with LUCY of FATIMA, nothing happened…

News:THE NATIONAL PRESS SCIENTIFIC
Tomorrow June 27, 2011, an asteroid will visit the Earth, ‘brushing it’ at a distance of 12,000 kilometers. There is no risk of impact, according to experts in the Jet Propulsion Laboratory (Jpl) of Nasa. The transition is expected to be at 19.00 hs. tomorrow and will take place in correspondence to the antarctic coasts bathed by the south Atlantic sea. It will be a close encounter, but not a record. The record for the minimum distance it is indeed up to the small asteroid 2011 CQ1, with a meter of diameter, that on the evening of February 4 last passed to 5,480 kilometers from the earth’s surface. THE asteroid which is approaching the Earth tomorrow, called 2011 MD, has a diameter estimated of between 8 and 18 meters, it will be the largest to come closest to Earth since the surveillance program for small celestial bodies that may be close to the Earth (the so-called Neo (Near Earth Objects)) is active.
With the help of a good telescope, the passage of the asteroid 2011 MD can be observed at sunset in the Southern hemisphere, from South Africa, Australia, New Zealand, south Asia and western Pacific. According to experts, the risks of an impact on the asteroid with satellites that are in the geosynchronous orbit (approximately 36,000 kilometers from the earth’s surface),  are extremely reduced,. The arrival of the asteroid 2011 MD was discovered by the program Linear (Lincoln Near Earth Asteroid Research) of the Massachusetts Institute of Technology (Mit) and it will come again to the Earth in 2022. But even then, note the experts, won’t be a threat. The increased risk could be its explosion in the impact with the atmosphere: a spectacular event but is not dangerous.

Other news on the subject:
http://notizie.it.msn.com/fotostory/gallery.aspx?cp-documentid=158392160

«AS AN ASTEROID »
» THE PONDERABLE CLASHES WITH THE IMPONDERABLE »
» THE HUMAN CLASHES WITH THE DIVINE»
IS ALREADY FREE THE ARM OF HIS SON ?
HAS ALREADY STARTED THE ANGUISH OF THE GENTILES?
MESSAGE GIVEN BY THE MOTHER OF THE GOD-MAN TO CONCHITA GONZALES, AUGUST 14 OF THE YEAR 1970, AT GARABANDAL ( SPAIN ) :
» THE WARNING IS LIKE A TERRIBLE THING THAT WILL PASS IN THE SKY».
THE BLESSED VIRGIN DEFINED IT WITH A WORD THAT BEGINS WITH THE LETTER ‘A’ . IT WILL BE THOUSAND TIMES WORSE THAN A TERRIBLE EARTHQUAKE . IT WILL BE AS A FIRE . BUT IT WON’T BURN THE FLESH . WE WILL FEEL IT BOTH PHYSICALLY AND SPIRITUALLY.

WILL IT BE ENOUGH FOR MEN TO REPENT?
TODAY THE REALITY IS GIVEN FROM WHAT IS SEEN AND FELT . THE WOE ARE ALREADY THERE, AND EVERY DAY THAT PASSES ARE BECOMING INCREASINGLY HEAVY AND DEADLY. THERE IS NO NEED TO BE RELIGIOUS TO UNDERSTAND THAT THE INTOLERANCE OF THIS SUPREME BEING THAT GOVERNS THE HEAVEN AND THE EARTH , IS MANIFESTING WITH  PRECISE AND CLEARLY SIGNIFICANT ADMONITIONS.

THERE IS NO NEED TO BE SCIENTISTS OR LEARNED TO IMAGINE THE TERRIBLE CONSEQUENCES ARISING FROM A NUCLEAR CONFLICT . THE CONDITIONS ARE ALWAYS EVIDENT AND , BY WILL OR BY MISTAKE, THE IRREPARABLE DAMAGE CAN COME TRUE, THE SLOW AND INEXORABLE AGONY OF LIFE ON THIS PLANET.
MANY SCIENTISTS, AND BETWEEN THOSE IS THE ITALIAN ZICHICHI, ARE STRUGGLING IN AN ATTEMPT TO AVOID A SO TRAGIC MISFORTUNE OF MANKIND. REALLY THEIR GOOD WILL IS NOT ENOUGH IF IT IS LESS THAN THE AWARENESS OF ALL PEOPLES FROM EARTH. THE OTHER TRUTH IS : THERE ARE EVENTS THAT ESCAPE THE TERRESTRIAL LOGIC , BUT THERE ARE ! EVEN IF THE SCEPTICISM, IGNORANCE AND THE WILL TO DISCREDIT OF CERTAIN OCCULT FORCES RAGE AGAINST IT .
THE PONDERABLE IS ENCOUNTERING WITH THE IMPONDERABLE, AND HUMAN INTELLIGENCE WITH SOMETHING BIGGER AND MORE POWERFUL. AT THIS POINT THERE IS THE QUESTION : «ARE MEN ABLE TO BE SAVED THEMSELVES? »
IF NOT , WOULD IT BE ENOUGH AN APOCALYPTIC WARNING TO SAVE THE SALVABLE AND TO AVOID THAT THE PLANET BECOMES STERILE AND WITHOUT MORE POSSIBILITY OF HOLDING THE LIFE ?
VERY SOON WE’LL KNOW !
A FRIEND OF MAN
EUGENIO SIRAGUSA
NICOLOSI AUGUST 23, 1985

Many people wonder about WHO IS Eugenio Siragusa. We tell you, dear Terrestrials, it is better for you that you know. He is a dispenser of Justice and Love.
The Extraterrestrials
Nicolosi, may 1, 1989

THE RIVER THAT BECOMES STREAM
From the book » The prophecies of Rasputin » from Renzo Baschera
» … life is a gift of God, but one day it will become a burden, a curse … The rich will seek the death and those who have yet  the breast milk on their lips , because the oak will be split into several parts and the river will be divided. And it will become stream and then rivulet.
When my spirit is still on the Holy Mother many brothers will die by the sword of brothers and sisters; and when my time oassed, many people will die in fire and wormwood. But the great death will be the death of the family, which will be drained, abused, crucified. AND on its ruins will grow in the rose of despair … »
This tragic reality is what we are experiencing, the world’s newspapers speak about it daily. Children, adolescents, young adults, who are to make criminal acts and suicide because they are driven by this absurd, cruel, consumerist society. Suicide in barracks committing suicide in prisons, murders between young people of rival clans, crimes, young people are deprived of family values and find refuge in mutable pleasures of the corrupt matter(drugs, alcohol, prostitution, etc. ) that leads them inexorably to death.
The life, lord pillar of creation, manifestation of the divine, has transformed by the man in punishment. Another truth proclaimed by Rasputin and reiterated in  many occasions by EUGENIO in its countless communications «FROM EARTH TO HEAVEN». As one and the same voice, which unfortunately is backing in the history of our days, in these dark and sad times for humanity.

«Bitter Observation»
Savagely, without respite, and without impediment:

Man against man.
A crescendo barbarisation of man become as a beast! A slow, inexorable perdition of the man who fails to be in the image and likeness of the Creator. What emerges is the hell in the heart of men, burning every longing for hope for salvation. Intelligence is cloaked in hypocrisy, selfishness, deceit and shameful abominations, rejecting into the abyss of total dissolution Smiles and joys of life. Man against Man, with the infernal instruments of death and destruction.
Brother against brother, father against son and son against father for not having listened to the Love which called Love, Justice which asked for Justice, Peace calling for Peace, the Life that gave Life. Once again the man fails and the King becomes a slave in a world that is disrupted and whic submerges him in the silence of a death without Awakening, without Rebirth.
EUGENIO SIRAGUSA Nicolosi,
August 25, 1984

«The Unknown»
The growing cultural, social and political chaos of the human community on this planet shows, without a shadow of a doubt, that the unknown gravitating in the immediate future destiny of all the peoples of the Earth appears serious and threatening.
The vitality of what is useful for a healthy progress becomes increasingly weak while the Balance breaks down up to involve the normal process of coexistence among all the peoples of the Earth. Selfishness and the frantic race to abnormal profits, the arms and the imperious desire of domain arouse reaction, hatred and abuse of all kinds by putting a strain on the essential need for Justice, Peace and Love. The Life, empty of these High and Eternal Universal Values, is forced sooner or later to succumb. In this tragic time, we carry with a heavy unknown which is not deprived of tragedy for the whole human race.
The Signs of the Times are clear and obvious to everyone !
The Call to Repentance has been and is there, still despite the cold, passive reception.
At this point, even the most Holy of piety is destined to disappear.
Eugenio Siragusa
Nicolosi, december 13rd., 1984

THE WITNESS, THE DISCIPLE, THE MESSENGER. THE WITNESS OF THIS APOCALYPTIC TIME AND OF  THE GLORIOUS FATHER BOTH THIRSTING FOR JUSTICE
Filippo Bongiovanni 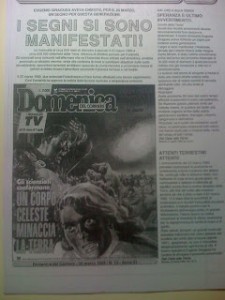 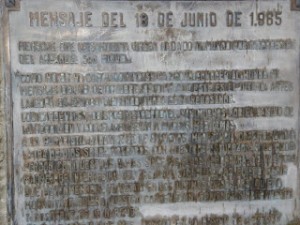 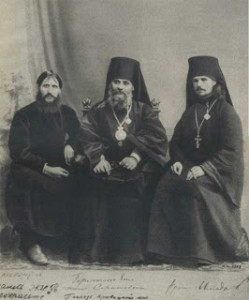 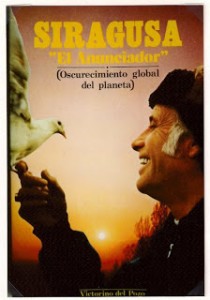 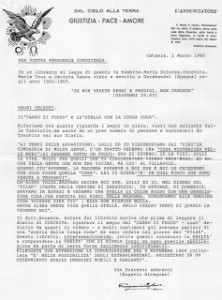 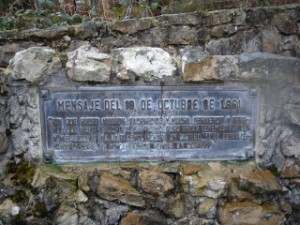