A story from yesterday, with an epilogue today

…We are in 1989 … the events are urgent and certainly we would have liked to leave in the hands of the Pope of that time, John Paul II, a Pope like any other, disobedient, the concern for the human race on the part of the Celestial Powers and what is loomed over him. .and even more than current today …
Read the request and the response received, but especially what happened to him a few days before …
«The Pope has no time for heaven»
«Staff of Monsignor Stanislao Dziwisz – Personal Secretary of John Paul II»
«Bishop Dziwisz,
It would be too long, with a single letter, to be able to explain who we are and what prompts us, in order to be obedient, to request a private audience with Pope John Paul II.
You must know that at the behest of Heaven and of those we know well, given the very serious situation in which humanity on this planet finds itself, on the road to self-destruction, as the Pope himself has said in recent times, it is very important to personally inform His Holiness our experience and that of Eugenio Siragusa with the Celestial Powers. We trust in the grace, understanding and devotion of the Pope to the heavenly Mother for the success of this meeting «.
Greetings,

-THE ANSWER
«Prefecture of the Pontifical House of the Vatican May 12, 1989
The prefecture of the Papal House in response to your recent letter, wishes to inform you that there is no possibility that they will be granted an audience of the Holy Father, due to the daily and multiple of his commitments.

These are difficult times.
We urge you, once again, to be careful and cautious. Evil is against good and hate against love: remember that!
Many, very many are those who prepare themselves to serve the negative forces that increasingly invest humanity with pain and despair.
The partisans of the evil one are inspired by violent, destructive and disharmonizing psychic dynamisms. You must stop them, with your spiritual fortress, their subtle moves even before their diabolical actions can involve you and enslave you to their perverse designs.
Remember: «be as pure as doves and as cunning as snakes.»
Your correctness and the longings for good that dwell in you, who prepare yourselves to be salt and leaven for the building of the promised new kingdom, are illuminated and supported by an irreplicable will and invincible strength.
May your perseverance be animated by the faith that has ignited in you who want to embody the supreme good of the greatest love of all loves.
We urge you to be strong, meek, and guarded.
Peace, justice, love to all. From heaven to earth
1 April 1980

More violence, death!
The offer of the resurrection of mankind was not accepted!
Then there is  hunger, crimes, despair!
The voice of the righteous, the meek and the peaceful is suppressed by the violent orgasm of those who feed on selfishness, hate, revenge.
Heaven’s invitation has been rejected and blood flows in the prairies, valleys and mountains of this weary land, devoid of love and peace. The souls live in the storm of fear, pain, anxiety, gripped by a gray atmosphere of madness, dissolutions, corruption, barbarism.

It´s meditation time for those who hope in God’s holy justice. John of the cross
April 6, 1980

It is not only Italy that lives its dark days, but the whole world, in the grip of a selfish and destructive madness.
The intelligence of the crowd becomes more and more charged with negative values ​​and headed for complete dissatisfaction, with the progressive collapse of what remains and resists in the intimate moral and spiritual structure of each individual, strategically wrapped in a tight, suffocating spiral , imposing, violent.
hate and disaffection secretly feed on a slow and subtle poison that transforms man into beast, good into evil, love into hate, peace into war.
But the occult is obvious to those who, freed from the truth, can no longer be compromised by the subtle ambition of those who serve the evil art of despotic and tyrant power.
Therefore, cry out loud:
May wisdom and hope be the pillars of your salvation, and fraternal harmony be the leaven and salt of a world that wants to clothe itself with love and peace in the light of true justice and of happy, healthy and fruitful progress.
John  of the cross
August 5, 1980

WOODOK FROM THE CRISTAL – BELL
«HARBAR ATTACKS THE BRAIN OF MEN WITH GREATER VIOLENCE».
THE RECRUDESCENCE OF EVIL IN EACH MANIFESTATION IS INEVITABLE, IF THE NATURAL BALANCES ARE NOT RECOVERED.
THE AGENTS THAT DISEASE THE STABILITY IN THE PHYSICAL AND PSYCHIC PROCESSES ARE BECOMING MORE AGGRESSIVE AND DEGRADING.
MAN CONTINUES TO LOSE, WITH PROGRESSIVE WEAKENING, HIS REAL FUNCTIONALITY IN THE EVOLUTIONARY PROCESS OF CREATION.
THE PARTICIPATION OF THE MAXIMUM POWERS OF SPIRITUAL, MORAL AND SOCIAL VALUES BECOMES IRREVERSIBLE AND THE DECADENCE OF CIVIL COHABITATION SLIDES INTO TOTAL ANARCHY, IN THE DISMISSAL OF THE MOST ELEMENTARY RIGHTS FOR THE SURVIVAL OF GENDER.
MADNESS HAS GRADUATED THEIR LIFE THAT FIGHTS, HURTS AND KILLS.
REMEMBER:  YOU WILL NOT SAVE  WITH WORDS YOURSELF FROM WHAT DAY BY DAY, HOUR BY HOUR FORCES YOU TO PERISH MISERLY.
TAKE JUDGMENT AND PUT THINGS BACK IN THEIR RIGHT PLACE.
WOODOK AND THE BROTHERS
DALLA CRISTAL – BELL
November 21, 1980
16:00

The most probably ending
From heaven to earth
«April 1980»: you are on the edge of the abyss!
You keep making wrong choices; thus proposing dire destinies. We had warned and advised you well: you did not want to listen, letting yourself be carried away by a madness that can only produce destruction and death.
The power of the beast conditions more and more, drastically, the perverse intelligences at its service, thus gathering a negative psychic dynamism capable of definitively eliminating any possible hope of salvation from those who would like to remain incorruptible and integral in the sublime values ​​of life and the good.
Evil becomes more and more disturbing, encroaching on minds and hearts and disintegrating, with subtle diabolical art, the already fragile bridge of coexistence and human rights.
But remember: heaven watches over and protects with its justice all those who have said yes to the greatest Love of all Loves.
Remember! From heaven to earth
April 14, 1980.
12:00
The witness. The Disciple. The messenger.
The witness of this apocalyptic time
and of the Glorious Father, both thirsty for Justice.
Filippo Bongiovanni 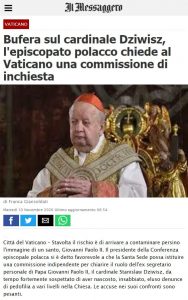 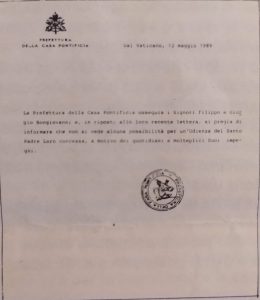