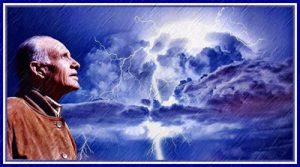 Resumee
To be witness of a special person as Eugenio, is something very important and specially, as Filippo is. To have known him, hug him, makes him speak with so much feeling about this special being.

FULGURATION.
Filippo Bongiovanni: «I died at 1976, when I met Eugenio, it was also on July, I received a fulguration. In the same way that Eugenio received in 1952. When they interviewed him from the RAI TV, – they asked him about his fulguration experience in 1952 and his first contact at 1962, if it could have been a dream perhaps- and he answered: «NO, THIS IS SOMETHING VERY REAL».
The same happened to me when I met him. Because since then, he has been always next to me, at every moment, and also at the same time because I have received a truth which comes from thousand and millons of years. It resumes in being capable of annunciate what we are living as humanity, passing from the hypercrytic point to the hyper chaotic point».

– The division between spiritual and material, cosmic and religious, that the powerfull of the earth had generated, nothing has to be with what the Truth is. For example, when Jesus-Christ had said «I am not from this world», from which world was him?. The religions divide rahter tan unite the events of various kinds, for example Jesus is not the pattern of Catholics, is a solar genius. these are divisions, barriers that have created men. «If you you define Catholic, Jewish, induista, Muslim, then you are being violent,» says Khrisnamurti, only when we understand this concept can become aware of what Eugenio spoke .

MAN COMES FROM WATER.
– Man has adapted to the earth but comes from water, this has been proved by science, and was always transmitted by Eugenio, we come from the plumed serpent. DNA genetics had failed, and we are very concerned about a disease called HARBAR, the plague of brain neurons, and has reached uncontrollable levels, producing the urge to kill and kill oneself. This also spoke Eugenio.

GNA INSTEAD OF DNA

The new gene is called the GNA, which approximates to the values of justice, love and peace. Love with no weakness, without excessive mercy . The dominant values are «love your neighbor as yourself» as well as «the need for all the superfluous to anyone.» This will be the new civilization.
– Our senior brothers, have been communicating this through Eugenio, their call to humanity to approach the Christic values, as the event of the second coming is near. And in this sense what we should do is to religate, but not as a selfish religion as the religions that created men are, but from the possibilitty to link what is our spiritual root to the events that are happening right now.

– Inside the Earth, which is hollow, there is an inner continent called El Dorado, Admiral Bryth spoke about it, in his expedition it was discovered. El Dorado has an internal sun which has a specific function that fifth-dimensional beings inside have. Eugenio has said that El Dorado will resurface, highly evolved beings will emerge.

MEDIA OF EUGENIO´S WORK
– During the broadcast, Filippo made a synthesis of what the work of Eugenio was about, the steps of his work in what refers to the Media his group developed (CSFC, Adonay Association, Non siamo soli), the important moments that have happened, including the last phase which is through Solex Mal Universal Language, Testimony phase of his work.

THE ETERNAL MUTANT AND THE VIRGIN
Also he spoke  about Giordano Bruno and how Bruno told about the plurality of inhabitated worlds, as well as Fatima´s message, which speaks of the moral decline of humanity in all senses , such as the disasters promoted by the nuclear weapons, and of beings which come from far places of the Universe in the name of God.
In the same way the called «Miracle of Fatima», of which 70.000 people were witnesses, refers to a second sun which fly around the sun, and that really is a spaceship, prodigy which was made by the Virgin to give reality to Lucía´s (Fatima´s seer) words in front of the people.
Giordano Bruno and the Virgin are very close to Eugenio´s work, not only because of the style of their messages and knowledge, but also because of the beings which brought these messages.
If someone is trully predisposed to the Truth and to the real evolution of the spirit, it´s necessary to show these things, you have to be brave to do it.
This is what Giordano Bruno did, for what he was burnt alive. And is what Eugenio did.
– Once you know the Truth, it cannot be suppressed. Their words are totally present. The Virgin is also a cosmic being, and does not belong to an only religion.
Cagliostro had revealed this Truth, as Rasputin did it too. They were in mission on the Earth.

– One of the worst things that Church had made is not to reveal the complete Message of Fátima. Although the Virgin asked that it had to be revealed in 1960, including that part in which sh says that Satan will reach into the cuspid of the Church, many inside of the Vatican had recogniced it and announced it but not the Popes totally. And the Popes which had tried to do it, had been eliminated, as it happened with Paul VI (to whom a double has replaced him, and then he has been eliminated) and John Paul I.
Fatima is always present, this is what Eugenio said, in his knowledges and messages that had transmitted since the ´50: «The truth is always uncomfortable, as it was 2000 years ago, for what Pilates handed Jesus. If Truth is uncomfortable in this planet, then renewal is inevitable» .
Eugenio has been the most iluminated man that humanity had during the past century. His messages are part of Crist-light and of a Truth that has millons of years. He always said, I am not a body´s doctor but a spirit one.
Because of the situation that humanity is now, only the saveable will be saved, tha quality not the quantity, and this quality only could understand the message and the Truth that he transmitted.

He is the voice that shouts at the desert.

FROM GOD TO MEN
«There’ s nothing I can do if you continue to ignore that I am inside of you».
The day that you will come to feel Mi Real Presence inside of you, your pains will end, because finally you will understand My Living Nature in the immutable and eternal Law of everything which is Created or Un created and that makes part of Myself, of my Eternal Becoming.
That day you will exult of Enormous Joy, because you will become conscious in Me and you will understand that your are part of Myself, of my infinite and divine Love .
I have let you in the darkness of your days, but you must know: My Patience is Great and your Salvation certain.
I will put you on a bigger test, but I will take you to the Supreme Consciousness of my Truth which is inside of you.
The Announcer
Eugenio Siragusa
Catania, November 1st. 1971

These are the real Christic messages.

When asking if Eugenio Siragusa is a reencarnation of John the Evangelist, Filippo answers Yes. «And not only because Eugenio told it, but also for the quality of his esence, of multidimensional being. And also other experts had said it (experts that don´t belong to Eugenio´s  work – Such as Pier Carpi y Renzo Baschera-). Because of the elegance and spiritual aristocracy of people as Giordano Bruno, John the Evangelist, Cagliostro and Hermes Trimegisto, which resemble in what they have transmitted.
The spirit of the Promise Comforter from whom Jesus spoke, who would stay until He returns.
That one who could say the things that 2000 years ago humanity was not in grade of comprehend, and that today and since then, these characters had transmitted and which unite in this multidimensional being also called the Eternal Mutant».

THE CONSPIRANCY OF THE SILENCE

– At the same time, it exists what Eugenio used to call «the conspirance of silence», and all those mechanisms of lying, hiding, distorting, ridiculizing the Truth. And this could be:  inserting ideas as the one of the repitlians as so much movies pretend to show extraterrestrial as negatives, or also to deny or replace cientific information as Nasa does saying that they know less than what they really know.

THE AIM OF THE MESSAGES OF BEINGS OF LIGHT

– Great part of his messages had the aim of alerting us of the great danger of nuclear energy and the damage we´re doing to the planet every day more and more.
The most important that Eugenio transmitted, is the willingness to change the things, the intentions, even if now it´s not possible to implement the mechanisms by ourselves in order to change the planet. But with the predisposition, we can make the quantum leap that the planet is about to give, this way the spirit could remain safe.
When this will happen, there will be no more handlers, usurpers, murderers of life.
There will not be possessions, there will be living together in brotherhood with the planet.

– Finally, the journalists of the radio program, dedicated it to the victims of Turkey, Niza – France – such as the italian victims, inspiring in Eugenio´s messages, reading some words they wrote, and finishing the reading with Eugenio’s message EARTH IS ALIVE.
Earth is alive
If you still don´t know it, it is good that you know it. Try not to coerce it´s cosmic balance; try to understand it and most of all to love it. Earth is a generous mother. It is not only a planet, but also a living cell of the cosmos, of the Living God.
If you don´t love her, she will not love you. If you try to destroy her, she will destroy you; if you try to disharmonize her, she will cause you trouble, she will deny you the lifeblood which feeds the hapiness of your existence. If you understand her and you grant her the proper and fair care, she will gird your existences of prosperity. There cannot be grape or vine without land; there cannot be spigot

or wheat, if there is no one which generate «flesh and blood».
Remember it, The Earth lives and it is called «GREAT MOTHER».
Eugenio Siragusa
Bordighera, May 10 th, 1976

www.pesolex.com/en
Eugenio Siragusa Studies Center, is a foundation which borns under the name of Solex Mal Universal Language, because it inherits the testimony of Eugenio´s work, through the fair and genuine message, conveying his work in a clear way.
Everything that it is made in the foundation is free, as he wanted it to be and as he taught.
We´re all equal, we don´t have structures or hierarchies.