The Volcano reminds us of Eugenio and his encounters with BEINGS FROM OTHER WORLDS …
-I left Rome to return to Sicily on February 17, the day of the martyrdom of Filippo Giordano Bruno, and upon entering Sicily, Etna was erupting …
Etna cannot fail to remind us of the sacred mountain, the place where Eugenio spoke with the Angels of yesterday, Extraterrestrials today …
The great solar spirit, the philosopher and thinker, the forerunner of Eugenio who would speak of the plurality of inhabited worlds.

TRULY I TELL YOU:
I HAVE REMAINED ON EARTH TO BE A TESTIMONY OF THE PROMISES OF THE MASTER JESUS CHRIST, AND TO PREPARE THOSE WHO HE CHOSE TO BE THE SALT AND LEAVEN OF HIS KINGDOM IN THE WORLD.
IT IS TIME FOR ME TO MANIFEST, BROTHERS AND SISTERS, WHAT I WAS AND WHAT I AM NOW, BY THE WILL OF HEAVEN.
I DO NOT SAY THAT I AM THE CHRIST, BECAUSE I AM NOT.
I DON’T SAY THAT I AM A TEACHER, BECAUSE I AM NOT.
BUT I SAY THAT I AM A BROTHER IN THE SPIRIT OF JESUS AND, AS HIS DISCIPLE AS HE  WANTED, STILL LIVING IN THE MIDST OF YOU.

THEY CALLED ME JOHN AND THE SPIRIT OF JESUS COHABITED IN JOY WITH MY SPIRIT BEFORE RECOVERING HIS BODY, WHICH WAS MADE IMMORTAL BY THE DIVINE LIGHT OF «CHRIST».

BEFORE BEING WHAT I AM IN THIS TIME, GIORDANO BRUNO WAS THE TRUTH, PERSECUTED AND KILLED.
TODAY I AM THE ONE YOU KNOW TO FULFILL WHAT, THE ONE I LOVE MORE THAN MYSELF, TO WHOM I HAVE GIVEN MYSELF ENTIRELY BEFORE I AM. THIS I ANNOUNCE YOU IN BRIEF, SO THAT EACH ONE KNOWS THAT I AM READY, TOGETHER WITH THE BELOVED SOULS WHO, LIKE ME, LIVE IN CHRIST AND ACTS IN UNISON WITH THE SON OF MAN JESUS, MASTER OF LIFE AND TRUTH.
Eugenio Siragusa
Valverde, February 26, 1972

STILL TODAY, DESPITE THE CLEAR DEMONSTRATIONS OF BEINGS DEIFIED AND ENHANCED BY THE HOLY COSMIC SPIRIT, YOU WILL PERSEVER TO IGNORE THAT LIFE PULLATES IN MILLIONS AND BILLIONS OF WORLDS.
GIORDANO BRUNO HAS BEEN CONDEMNED TO FIRE FOR HAVING ANTICIPATED A CLEAR AND UNMATCHED TRUTH LIKE THE ONE ANNOUNCED BY GALILEO.
SOON YOU WILL FIST YOUR CHEST FOR THIS OTHER CRIME AGAINST GOD AND MEN ENLIGHTENED BY HIS DIVINE TRUTH.
FROM HEAVEN TO EARTH
Nicolosi, November 1, 1992
9.00 a.m.

The witness. The Disciple. The messenger.
The Witness of this apocalyptic time and the Glorious Father
both thirsty for justice
Filippo Bongiovanni

-ULTIMATE NEWS:
https://aforisticamente.com/le-frasi-e-citazioni-piu-belle-e-famose-di-giordano-bruno/?fbclid=IwAR3jbh95Y927QtjEcTLZmVBHjKSOxjBe2XuptOwtg6Y0PXc3lir0JqJ3uwc
The most beautiful and famous phrases and quotes of Giordano Bruno

«Even Christ sinned in Gethsemane when he did not want to do the will of the Father.»
Taken from «The most beautiful and famous phrases and quotes by Giordano Bruno»

-ABSOLUTELY NOT…!! That was not the phrase … The solar genius Christ-Jesus knew very well of his choice and intention and that he would submit to the Glorious Father, thus placed it would have been an act of disobedience to the Creator ”, the ambiguous phrase» which was wrongly put in the mouth by Giordano Bruno … he does not find confirmation of what he said … and so we can read
«Humanity has conceived the germ of utopia and gestation is advancing towards its inevitable fulfillment: the last century is an important stage, which precedes birth. Divine beings watch over the gestation of the earth and some are born here to help humans to understand that transformation also depends on its awakening. «

-My clarification is necessary, many phrases have been improperly attributed to Giordano Bruno as well as the following:

«When times are ripe, selfishness and money will reign supreme, saints and virgins will be seen everywhere, miracles and extraordinary events and WHEELS OF FIRE IN HEAVEN
Magic, astrology, alchemy, and Satanism will involve a lot of people. Satan will be present on earth and will deceive many.
And many will be those who will follow.

And many will be the ones who will feel its presence.
The cloak of Satan will always be seductive.
And it will be the clothing of the beings of the cosmos because the Earth is only a grain of sand, in the infinite progression of the universe.
In those days we will finally know what the retraction of heaven means. And a black sun, in space, will swallow up the sun, the moon and all the planets that revolve around the sun.
Remember that when the end is near, man will travel through the cosmos and from the cosmos he will learn the day of the end.
And remember man that many rich and proud cities, just when man believes himself owner of the cosmos, will end up like Sodom and Gomorrah»

-The Logic indicates that, if that was the case, it would lead to deduce that humanity would have been destroyed by these beings of the cosmos …
On the other hand, and therefore the religious manipulation of temporal power, leads to attributing exactly that is to denigrate as the thought of Filippo Giordano Bruno … the reality he revealed …
Filippo Giordano Bruno … forerunner of Eugenio Siragusa … they are a single spiritual personality ..! 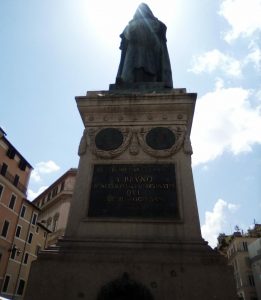 Translation of the video: News about the last eruption of Etna February 2021
Eugenio says:  «The volcano is my friend, I love it, I love it because I know why it was created, and I know what its positive functions are. I have a photograph that I can show you, of the face of lava He was descending and I told him «STOP, out of courtesy stop because the statue of the Virgin is near here and I don’t want you to hurt her.» He stopped suddenly.
– By the way: do you remember when you went to the mountain and stopped at that little house where you stayed and was respected by the lava?
– Exactly. Because with lava, I am a friend of fire « 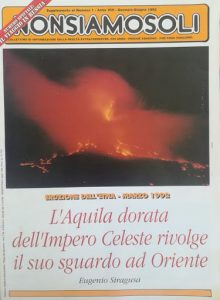 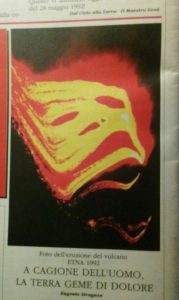 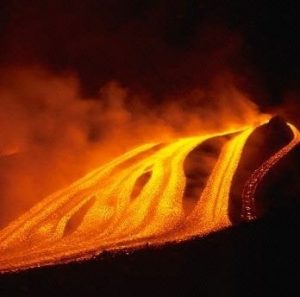