OPEN LETTER TO THE RESPONSIBLE FOR ALL THE PEOPLES OF THE EARTH:

Ask yourself, as I have done as a man; just ask yourselves all men and women…!!!

A society devoid of any existential value and any fear toward God and his laws. What can this society have the hope to obtain, when the first offenders are men who are responsible for the protection of the peoples? A license in each field and in any rule, allowing you to achieve the objective of the warmongers, the murderers of life and those who want to, conscious or unconscious, that life is shut down at this planet.

A civilization which is so decanted, who is afraid to withstand the Truth with all their heavy burden of guilt, of passivity and indifference, a civilization already slave of this or that another power, which creates increasingly superstructures, bureaucracies and any other impediment to cure and heal not only the effects, but also and mainly the causes.

A society that is defined «SUPERCIVILIZATION», is increasingly pretending to desecrate, reneging, betray and scoff, without any fear, of this Omni creative intelligence that, from what I have been given to know, has lost the patience toward the man and his work.

What can you expect of this generation more roguish, more evil and more perverse that Sodom and Gomorrah? What can you expect of this society which will not be able to say in front of God ‘ I DIDN´T KNOW … «? On behalf of both permission and freedom, rulers and people walk daily on the sumptuousness and on the blood of his own brothers to have the superfluous and the guilt of having removed the necessary to the neighbor.

A society that is incapable of giving answers to the interior life, which reiterates the errors, the ruses, deceptions, the institutes that are nourished by that same thing.

A humanity, which raises once again also in this time the golden calf, sets above the SON OF GOD AND THE LAWS OF THE FATHER and justifies Barabbas to crucify daily the Way, the Truth and the Life.

A humanity that with its religious bodies, the churches increasingly blind, become deaf, incredulous to what heaven and its Powers spread as reprimand to the work of man. A new answer to understand who really has the domain and the fate of the world. Yes! Christians against Christians, Brothers against Brothers, blood against blood. What kind of civilization is this?

Religions and their guardians should say bread to bread, and wine to wine. Religions and those who administer should be a living example of the law of Christ instead of preaching the good and sow evil. An additional confirmation for those who want to see and hear, for who must discern, uncap the ears and watch us clear and to really understand where the enemy resides and that is in contrast to the values of Christ.

The religion, which should have united peoples «re attaching» events of the past, present and future does not make another thing that to descend to covenants and conditions with whom want death, hatred, justifying in the name of, and on account of just causes, war and the military virtues.

The church of Christ is worse than a cave of robbers and criminals who usurp, whitening the tombs with innocent blood of the Way, the Truth and the Life, to hide the murky negotiating with enemies of the light Yes! Guilty is the religion and who manages it and will have to be submitted to the One who presides over the heaven and earth and to answer for their actions. Yes! A total snub from man toward God and the guardian of this planet Christ-Jesus and to the Holy Virgin Myriam your and our Mother!

THE WITNESS THE DISCIPLE THE MESSENGER

THE WITNESS OF THIS APOCALYPTIC TIME

AND OF THE GLORIOUS FATHER, BOTH THIRSTY OF JUSTICE 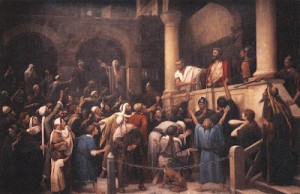 FROM AN ALIEN IN SERVICE ON EARTH

«WHO DO YOU WANT FREE? JESUS OR BARRABÁS?

BARABBAS! SHOUTED THE THIEVES AND THE WICKED».

AT THAT TIME, THE CRIMINALS, THE WARMONGERS, THE PERSECUTORS OF THE LAW OF GOOD, OF PEACE, JUSTICE AND THE LOVE OF THIS FAIR NAME OF JESUS, WHAT DO YOU WANT TO DO?

THE HUMAN BEAST IS STILL TODAY CRUCIFYING THE GENIUS OF THE GREATEST LOVE OF ALL THE LOVES, THE HOARSE CRY OF THE BLOODTHIRSTY RESONATING EVEN WITH ALL ITS WILD ANGER:

WAR! WAR! DESTRUCTION, DEATH!
BUT THE MEEK, THE PEACEFUL, THE PURE OF HEART AND THE THIRST FOR JUSTICE HAVE BEEN STRENGTHENED AND FIGHT AGAINST THE WICKED, AGAINST THE EVIL BLOOD-THIRSTY AND GENERATOR OF PAIN.

JESUS HAS BECOME THE LEADER OF THEM AND HIS LAW IS THE STRENGTH OF THEIR SPIRITS AND THEIR HEARTS.

THESE ARE THE ELECT WHO MUST SHORTEN THE TIME.

HERE ARE THE WITNESSES OF GOD, JEWELS OF HIS HOLY WILL, THE INSTRUMENTS OF HIS DIVINE WISDOM.

IN ITS NAME THEY OPERATE AND BY HIS LOVE LIVE AND STRUGGLE.