International Symposium on UFOs in San Marino in 2014

International Symposium on UFOs in San Marino in 2014:

Space Exploration and UFOs in the 22nd International Symposium, also Eisenhower´s greatgranddaughter on the Event that took place on 29.03.2014.

Official opening at the Titan´s Theater, the 22nd World UFO Symposium anticipated since the 15th Conference on Space Exploration and Life in the Cosmos: two days with guests and scholars worldwide.

The aliens and the President of the United States

Sixty years ago, Dwight D. Eisenhower would have met an extraterrestrial delegation: this will be announced at the next World Symposium organized in Italy

– Let’s start with our notice, with a contribution by Danilo Iosz and Laura Eisenhower. This last makes part of the inside of the same unique contribution.

“The website cited above, has today published the statements made by Laura Eisenhower, great-granddaughter of Ike Eisenhower, the general who was also the 34th President of the United States of America from 1953 to 1961. He is indicated by many worldwide ufologists as the one who had the first official contact (yet secret) with a supposed alien race visiting our planet. According to some sources , the meeting between Eisenhower and extraterrestrial delegation took place in 1954 at the military base Fields Muroc ( now renamed Edwards Air Force Base ), located at the California desert . His retinue included some of his staff Generals, a reporter for the Hearst Newspapers Group, a Catholic bishop and other people. There, Eisenhower witnessed the landing of an alien craft from which they came up some stellar visitors who talked with him and his retinue.

The notice of this meeting was never fully confirmed, although over the years a number of witnesses present at the military base at that time, began to admit that something «special» had actually happened.
However, it was really his great-granddaughter Laura, who now lives in California and is a teacher, who said that his illustrious great-grandfather had confirmed this to her. »
Danilo Iosz
«It’s time that the secrets of the contact between the U.S. government and the aliens are revealed. Yes, it is true, the United States is in contact with extraterrestrials and know that some UFO sightings has an extraterrestrial origin. As my name suggests, I am the great-granddaughter of President Dwight D. Eisenhower, and I must tell you right now that I’m almost certain Ike was aware that some aliens were visiting our planet. In many ways, this is obvious. It is said that Marnie, my great-grandmother and former first lady entrusted something about it to the father of the well-known UFO researcher Ed Grimsley. The military-industrial complex has thrived in secrecy and it is likely that any revelation that will be made about UFO will be manipulated in order to keep secret the reasons why this topic has been hidden for a long time behind us. I have good feelings about Obama and I suspect that he might reveal something, but will be forced to close his eyes to certain realities that he might not be aware of. Most of what has taken place in secret, has produced the inevitable tragedies, such as secret government projects costing trillions of dollars taken from our taxes, which had useful purposes only for a certain elite group. These projects included: colonial settlements on other planets (Mars , nd.r. ) , experiments designed to influence and change the behavior of certain people classified as a threat ( mind control , so to speak , ed), the Secret Space Program, but also HAARP weapons , underground bases and strategic false strategic events .
However, I believe that things can change and create a global transformation only after asking our leaders to tell us the truth about these beings from other worlds. »
Laura Eisenhower

“We are in a time of crisis, because of the poor performance of man in every «sector» , looking for the «proper » at every opportunity to find the right one to relaunch it and give, according to the insiders who » trades «in this case on this fact, a » breath » to the » worn out » and now outdated term» UFO » . The program for those who give life to these conventions (*) , like that of San Marino, is now more well known : to propose the sale of a book, which in the end does not reveal anything , the presence of some researchers , in order to attract attention to increase tourism in the area , signaling its presence , with the intervening of some other character in memory of important events interpreted but in its own way , to lose sight once again to the people , that they should no longer be deceived , but continue to be, about the true nature of the Electromagnetic Extraterrestrial Aircrafts which are present in our skies and their pilots who guide them.

Conference in Rome on UFOs (*)

Just to be fair, we hope that the great-granddaughter of President Ike Eisenhower may have been in a position to know someone from among those » speakers » present at the conference, and therefore she may have been informed and, at a later time, tell to the general public, about how her grandfather lived and with whom he was in contact at that time which was so important for the future of humanity.

(*) In 1985, the newspaper Nonsiamosoli draws from the book » The Giants of the Sky» (*) published only in Italy, republishes extending it to the whole world, an important article on the contact that the American President » Ike» had had with a delegation of Extraterrestrial Beings belonging to the Interstellar Confederation in mission on our planet, for the salvation of mankind, and the epistolary conversation he had with the contacted Eugenio Siragusa. The President Ike Eisenhower, had from the beginning -and on more than one occasion during his messianic mission-, an epistolary correspondence with Eugenio, sharing with him the primarily concern about Youth and what pertained to their future destiny. Remember that the President, in fact, had an encounter with extraterrestrials who conveyed to him that humanity would have 50 years of time to “put things in their proper place ,» and told him that he also would contact with their emissary : Eugenio Siragusa . That’s why the revealed mystery of how a humble shipper of Sicily at the 50´ had been in contact personally with the president of the United States.

The great granddaughter of the president, speaks of a truth that have closely characterized (*) the messianic work of Eugenio, by the will of the Extraterrestrials: Planet Earth is a living organism, dimensional doorways, Energy for the Evolution of the planet, the plurality of inhabited worlds, Man’s life was not by chance -but with an order and a definite purpose to the creative economy of the cosmos. 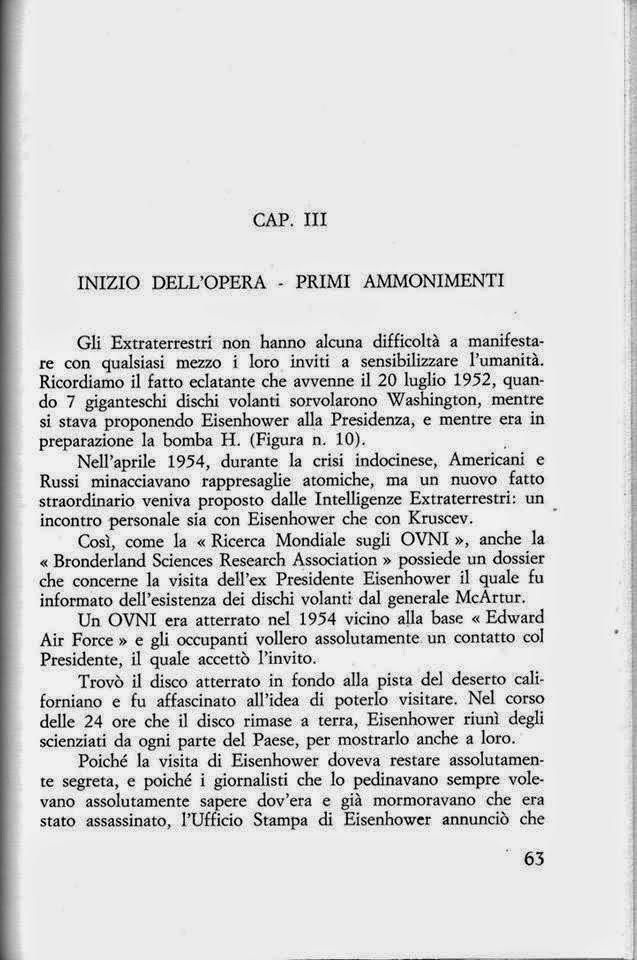 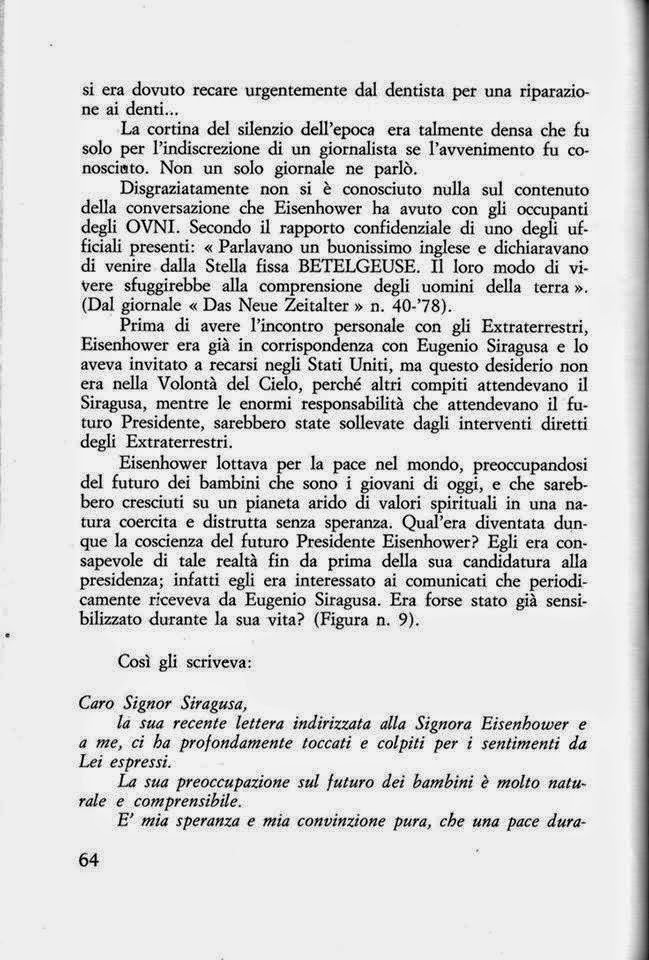 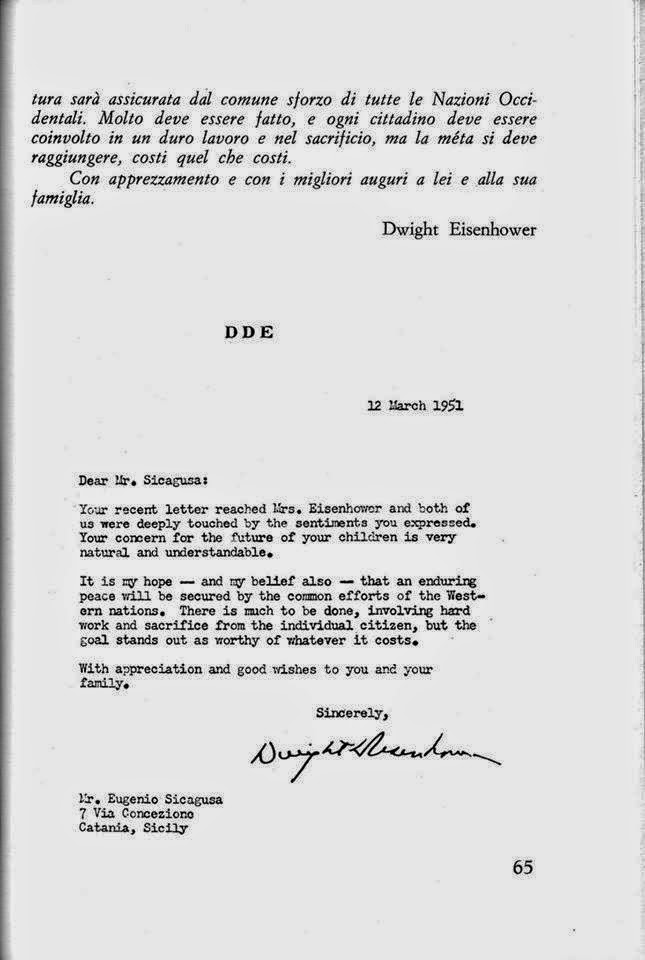 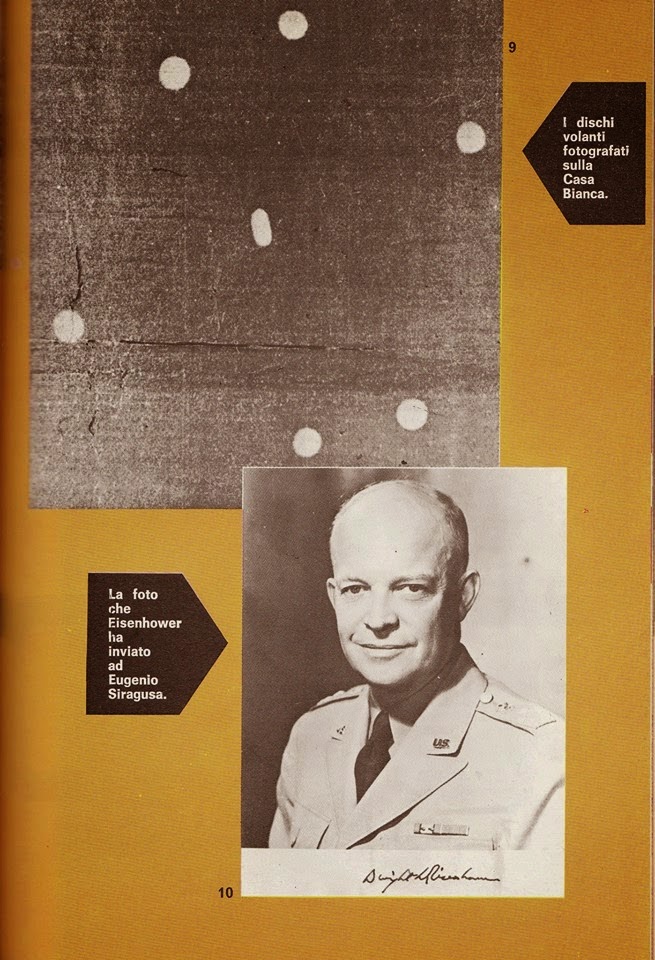 – We allow ourselves, as the occasion permits, to make a clarification for those who DO NOT BELIEVE IN EXTRATERRESTRIALS AND IN THEIR PRESENCE IN HEAVEN AND ON EARTH, making known about the thought of distinguished luminaries

ASK MANY OF THEM…

IN TURIN THE CONSPIRACY OF SILENCE´S EXPERTS HAVE REVEALED THEIR STILL FLAWLESS THESIS ON THE REALITY THAT THE UN SECRETARY U- THANT called the NUMBER ONE ISSUE OF OUR TIME.

THE LACK OF ABILITY OF CERTAIN WELL- QUALIFIED PEOPLE FROM HUMAN CULTURE IS REVEALED VERY ONCE AGAIN AS ACCOMPLICE OF WHO HAS ALL THE INTEREST TO HIDE A VERY UNCOMFORTABLE REALITY. THE ART OF DISSUADING HAS BEEN WIDELY MANIFESTING, OVERSHADOWING AND SHOWNING WITH SPEECHES AND PHILOSOPHICAL INHIBITS, OPPORTUNE FACTS CATALOGUED BY THE VARIOUS AIR MINISTRIES OF MANY NATIONS OF THE WORLD. APART FROM THE CHRONICLES OF MANY WITH WHICH THIS INDISPUTED REALITY IS DOCUMENTED, AND BESIDES THE PRESTIGIOUS CHARACTERS THAT HAVE ENDORSED THE SCIENTIFIC TRUTH , AN ANCIENT WELL DOCUMENTED STORY IMPERIOUSLY HIGHLIGHTS AND SAYS HOW THE EXTRATERRESTRIALS WERE AND ARE AMONG US

THE STATEMENTS WHICH RESULT FROM THE MINDS OF CERTAIN OTHER EXPERTS, ONLY BRING FOWARD PERPLEXITY AND COMMISERATION.

ASK MANY OF THEM:

AND THE LIST COULD GO ON AGAIN. IT IS TRUE THAT THE ABSURD ALSO HAS BECOME CONCEIVABLE , GREAT MEN OF LIABILITY OF OUR SOCIETY JOINED TO ORDINARY PEOPLE WORTHY OF FAITH THAT HAS SEEN AND TESTIFIED WHO WERE CLASSIFIED AS DREAMERS AND LUNATICS .

ULTIMATELY “WE ARE NOT ALONE “TO SAY, ​​BELIEVE AND SHOW THAT THEY EXIST AND SO REPLICATE

ONCE AGAIN THAT THEY ARE AMONG US.

-HUMANITY IS AT THE EDGE OF ITS SELF-DESTRUCTION, that’s why they have returned, “The Angels of Yesterday, the Extraterrestrial of Today» on board their prodigious means that line since the dawn of time, the skies of Planet Earth

Unfortunately, it is the truth!

For many, this phrase might seem product of our imagination or a mania to show, a pouring alarmism and apocalypticism.

The facts prove that we are right. The warnings, cautions, councils sent around the world for 34 years from the Extraterrestrial Intelligence, by Eugenio Siragusa, the most zealous of their emissaries, were in vain.

The selfishness, revenge, hatred, greed for power of man have completely canceled and have rejected the invitation from Heaven. The Angels are worthy to do everything in order to put things in their right place and to establish a rich society of prosperity and peace for all, in order to have happiness and joy of living in all corners of the Earth.

The refusal, in truth, has brought disastrous results for humanity.

But despite this, the man is still in time to put himself in repentance before the hypercritical point in which is located, go to the hyper chaotic step.

While now it is little left; God’s justice could erupt at any moment.

In truth we are not alone!

And we are still here to give you hope and a yearning to say that the miracle of repentance can still happen.

This is just an act of good will on the part of everyone, without exception: the powerful and the weak, rulers and ruled, atheists and believers.

Then the holy wrath of God will turn into a great act of love.

The atrocious news and statistics on the various facts, taken from the world press, should be enough to inspire you to say: ENOUGH! ENOUGH!

If you do not care what has been seriously compromised, there will be no escape to the humanity of planet Earth.

“We are not alone “in the bloody fight against the perversions of evil spells that infect the Earth and what lives and vegetates on it.

“We are not alone » nor are we deprived of heavenly comfort in the speech that we bring to awaken the human consciousness to a serious examination, in order to close the way to the tireless and pernicious delirium of perdition , destruction and death.

No! We are not alone!

The imponderable invincible force and the light of the Omni creative Spirit are with us.

The «Angels of yesterday, today extraterrestrials” and the Greatest Love of all loves are with us.

The One who loves is with us because we said » yes » to the call ; We said «yes» without limits or conditions

A friend of man: Eugenio Siragusa

”The Great Sowers” At the end of the note, the original article: THE EXTRATERRESTRIALS contact THE HEADS OF STATE

(*) THE GIANTS OF THE SKY downloadable for free from http://www.eugeniosiragusa.it/

(*) SIRAGUSA THE ANNOUNCER downloadable free of charge from the website:

The NASA ASTRONAUT STORY MUSGRAVE: “WE ARE AMONG THE EXTRATERRESTRIALS”

The RUSSIAN ASTRONAUT SHARIPOV “THEY WERE THE CREATURES ON THE MOON”