OUR LADY OF GUADALUPE WAITING FOR THE LIGHT (Part 1)

by Maria Pía Cavallo for the Eugenio Siragusa Study Center

The image of Our Lady of Guadalupe is that of Mary waiting for her son Jesus, as evidenced by the black belt tied under the breast, a sign of pregnancy for Mexican women for centuries. That is why pregnant women invoke it.
Guadalupe means «river of light», it is no coincidence that the festival is on December 12, the eve of Saint Lucia, and we are close to the birth of that child that she carries in her womb on December 25.
GESTATION-MOTHER, SON-LIGHT: The mother carries in her womb what will be the light of the world.
THE MANTLE, THE «TILMA» (THE MOTHER – GESTATION)
Some of the events that carry an important message are accompanied by what we can define as supernatural wonders, which sustain the message itself. The image on the canvas that appeared in Juan Diego in 1531 is of divine origin, it does not come from human hands, and it was painted by the One who has painted all of creation.
Both believers and skeptics have observed the mantle of the Virgin and have subjected it to dozens of tests. All confirm that the cloak and the image it shows have supernatural characteristics.
Our Lady told Saint Juan Diego to go up the hill, pick up some roses, and take them to the bishop. Juan Diego did not hesitate. The roses were there, although it was not the season. He collected them in his tilma (typical Mexican cape that they carried on his shoulder) and took them to the bishop as a sign that the Virgin wanted a temple to be built there. When Juan Diego was in front of the bishop and opened the tilma in which he carried the roses, they fell to the ground. As it was not the flowering period, the sign was understood to be true, and to their amazement the image of the Virgin appeared imprinted on the tilma.
It is truly amazing what science has discovered about this Tilma, which should have been destroyed after 20/30 years!
Ophthalmological studies carried out in the Ojos de María have found that when the light is brought closer to them, the retina contracts and, when the light is withdrawn, it dilates again, exactly as it happens to a living eye.
«I examined the eyes with a high-powered ophthalmoscope and I was able to appreciate the depth of the eye as if I were looking at a living eye,» said Dr. Enrique Graue, an internationally renowned ophthalmologist and director of a specialized ophthalmology hospital in Mexico.
The Purkinje-Sansom effect appears in the eyes: the image on the cornea and on both sides of the lens is tripled. This effect was studied by Dr. Purkinje from Wroclaw and Dr. Sansom from Paris, and in ophthalmology it is known as the Purkinje-Sansom phenomenon. This phenomenon, exclusive to the living eye, was also observed in the eye of Our Lady of Guadalupe by Dr. Rafael Torija with the help of an ophthalmoscope. The doctor certified it with these words: «The eyes of Our Lady of Guadalupe give the impression of vitality.»
The same affirm the doctors Guillermo Silva Ribera, Ismael Ugalde and Jaime Palacio, among others. Since 1950, the eyes of the Virgin of Guadalupe have been examined by a score of ophthalmologists. Recent studies with the microscope have revealed that the silhouettes of various people are reflected in the eyes of the Virgin, as when we look into the eyes of those in front of us and see ourselves reflected. Saint Juan Diego is also in the eyes of the Virgin. Scientifically it cannot be explained how twelve human figures appear in a seven millimeter eye.
Science discovered that Mary’s eyes have all three refractive effects of the image of a human eye. In Maria’s pupils (only 7.8 mm), tiny human images were discovered, which no artist could have ever painted. They are two scenes and they are repeated in both eyes. The image of Bishop Zumárraga in María’s eyes was enlarged using digital technology, and revealed that in her eyes the image of the Indian Juan Diego is portrayed, opening his Tilma in front of the bishop.
The scope of this image? – a quarter of a millionth of a millimeter.
The temperature of the maguey fiber (obtained from a plant) with which the shelter is built maintains a constant temperature of 36.6 degrees, the same as that of a living person. The canvas is supported against a metal frame that is constantly kept at 15 degrees to keep it cool, but this, when its temperature is measured, reveals 36.5 degrees, the temperature of a healthy human body.
The maguey fiber that makes up the canvas of the image cannot last more than 20 or 30 years. Several centuries ago a replica of the image was painted on a similar maguey fiber canvas, and it disintegrated after a few decades. Meanwhile, almost 500 years after the miracle, the image of Mary remains as perfect as the first day. 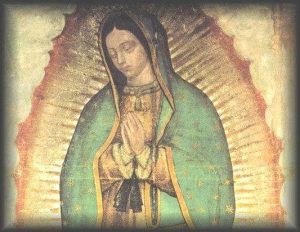 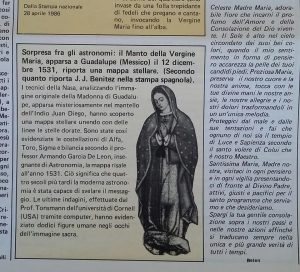 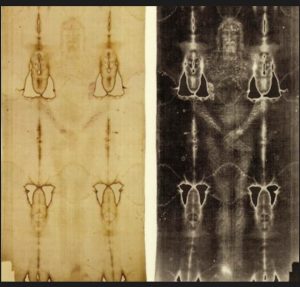