THE RENEWAL OF THE WORLD IS IN JOHN´S SPIRIT

A soul-spiritual reconstruction of the fundamental importance of the Solar Christic Spirit of John, which remembers him on this day. Detaching and emphasizing, in this writing, with other texts of  historical nature, the revelation handed down to us by our beloved Master´s Apostle. 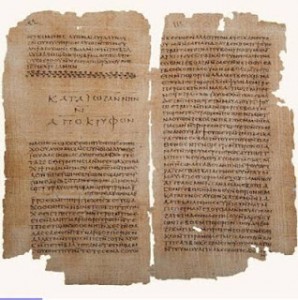 The Apocryphal of John

Suddenly, while I was contemplating these things, there it was! The heavens opened and the whole creation shew a highly light, and the world trembled! I was afraid, but there it was! A small child appeared in front of me in the light. I continued to look at him as growing old and then changed again, becoming as a young man. I could not understand what I was seeing, but the similarity was shown in various forms of light, and these similarities appeared through each other and the vision had three forms.

He said, «John, why do you doubt? Why are you afraid? Didn´t ypu know this my outward form? Do not be afraid. I am with you always. I am the Father, the Mother and the Son. I am the incorruptible purity. I came to teach what is, what was and what will be for you to understand the invisible world and the world that is visible, the unchangeable course of human perfection. Get up your head; learn my teachings, Share them with all the others who have received the Spirit, who are unchanged as a result of human perfectionism. »
The inexpressible One

The One governs all. Nothing has authority over him. He is the God and Father of all things, Holy.

The «invisible” over all. It is pristine pure light, where no eye can look.

The One is  «invisible Spirit”. It is not right to think of it as a God or as God, is more than  just a God. Nothing is above the One. No one governs the One. From the moment everything exists within the One, does not exist in anyone.

The One cannot be seen, because no one can imagine it. The One is eternal because it has always existed.

The One is inconceivable because no one can understand it.

The One is indescribable, because no one can put all the words on it. The One is infinite light, Purity, Holiness, Immaculate.

The One is incomprehensible. Perfectly free from corruption. It is not  «perfect», it is not «holy», not «divine», but above all these concepts. No material or immaterial, or huge, or infinitesimal. It is impossible to specify in quantity or quality because the One goes beyond knowledge.

The One is not a being among other beings. It is far superior, but it is not «superior». It is outside of  the realms of Being and Time. All that is within the realms of  Being has been created and everything that is in time has been assigned to it. The One does not receive anything from nothing, but simply learns itself in its own perfect light.  The one is majestic. The One is the immeasurable majesty. Incommessurable Head of all realms. The Creator of all kingdoms. It’s The Light. Creator of Light. Creator of Life.  It´s bliss. Creator of bliss. It is Knowledge. Creator of knowledge. It’s good. Creator of generosity. Is Mercy. Creator of mercy. Is Generouse. Creator of generosity. (And do not «own» these things) emits light out beyond measure, beyond comprehension.

(What can I say?) The One´s  reign is eternal, peaceful, quiet, rest, first of all.

The One is the head of each realm supporting each of them through the generosity. 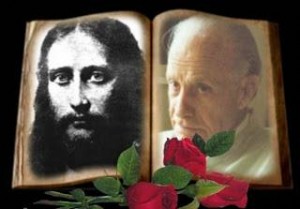 John the Apostle when he was in Macedonia and Eugenio
The image of John the Apostle sent to Eugenio Siragusa by the sages of Himalaya. Indeed, it is the fundamental spiritual character that works through Eugenio for the work of redemption, as the Comforter, which is the bearer of the divine revelations. Each of us will always have the discernment to choose our own path. The question that Peter makes to Jesus-Christ «What will become of John?» Christ said, «If I want him to remain until I come back what does it matter to you? You Follow me.»
Eugenio answers a precise question:
Q) So we can say that we are living in the Apocalypse.
A) … «Of course, and this is the prophecy that John Evangelist has written. And is in full development. Recently we found a plate of basalt, where it says,» I am the way, the truth and the life, apart from me you cannot get to the Father «, this phrase is refered to John the Apostle. He inherited the fate of humanity, and all he wrote in fifty years (note: It refers to its informative work), has been disseminated, so that people realize that Adonai does not regret of having said that will destroy humanity, because he will destroy the evil, the destructive part, the killer, the ignorant part «… 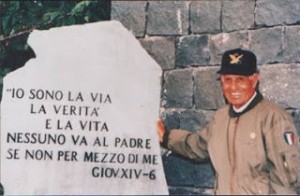 Plate of basalt Nicolosi-Etna area S. Leo with Eugenio
Let’s be clear: John’s spirit is NOT … CHRIST! But through his solar CHRISTOLOGY, his PERFECT KNOWLEDGE OF DIVINE LOGOS CHRIST, we can be lead to the threshold of the GLORIOUS FATHER … ! 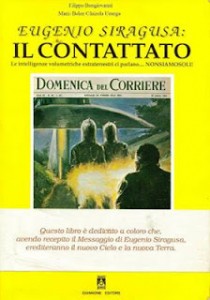 THE FIRST BOOK INFORMATIC VERSION, IN ITS SECOND REVISED AND ENLARGED EDITION

«IT IS TRUE WHAT THE LORD SAID THROUGH THE MOUTH OF HIS SERVANT.»I HAVE CHOSEN MANY CONTRIBUTORS AT THE TIME OF CREATION, SHOWN BETWEEN THE SPARKS OUT OF ME, AMONG THE MAIN, THERE WAS JOHN, WHO SHOULD REPRESENT THE ENTIRE HUMAN CREATION.

You will ask: WHAT IS THE CONNECTION BETWEEN JOHN AND HUMANITY?

THE INNER PURPOSE FOR WHICH JOHN IS CONNECTED TO HUMANITY ISTHIS:

MY GREAT LOVE FOR ALL HUMANITY ‘, REPRESENTED BY SPARKS GIVEN, WAS TO BE CONCENTRATED IN JOHN, SO FOR WHICH ONLY EXISTING HIM HUMANITY CAN EXIST.

SO THAT WAS NECESSARY BECAUSE THE CREATION, AS AN ACT OF PURE LOVE, NOT ALL THIS LOVE COULD donate DIRECTLY TO MY CREATURES, AS MUCH AS A CREATION SHOULD BE GOVERNED AND GRADUATED FROM A PERFECT ORDER.

THAT´S WHY JOHN SHOULD NOT DIE, TO REMAIN IN CONTINUITY IN THE WORLD UNTIL THE COMPLETE DEVELOPMENT OF THE RACE. HE WAS AND IS, LET´S SAY  IT LIKE THIS, THE ACCUMULATOR OF ALL THE POWER OF LOVE, EXPANDED AND COLLECTED IN HIM, IN ORDER TO BE GRADUATED IN THE MANIFESTATION .
IF HE WILL THEREFORE DESTROY JOHN, HE WOULD DESTROY ALL HUMANITY !
THIS IS ONE OF MANY MYSTERIES ON HIM.

«I HAVE SAID AGAIN:»LATER THAT DESPOT, sensing the DIVINE POWER AND FEARING FOR HIMSELF, ‘relegated’ JOHN IN ONE OF THE SEVERAL ISLANDS OF THE AEGEAN, AND DIED VERY OLD.

IN FACT, HE DIDNT DIE, THE WAY YOU KNOW IN YOUR WORLD, BUT HE  STEP IN ANOTHER BODY READY FOR HIM, AND SO WAS ALWAYS, UNTIL THE COMPLETE DEVELOPMENT OF THE RACE WHICH IS NOW IN  ITS EPILOGUE.

HE ALWAYS HAS BEEN THERE AND IS STILL NOW, IN THE SACRIFICE TO REMAIN ALWAYS ON EARTH WITHOUT THE POWERS THAT I CAN HAVE, BUT HE, ALWAYS GUIDED AND SUPPORTED IN ALL AND FOR ALL BY ME. I AM HIS ADVISER, HIS FRIEND, HIS BROTHER, HIS AFFECTIONATE AND LOVING FATHER, I AM ALL FOR HIM AS HE  IS ALL FOR ME. WE ARE ONE PERSON AND THE EFFECTS WON´T BE SEEN  WHEN I SPEAK ‘WITH HIS MOUTH AND DO EVERYTHING I DID, WHEN I WAS JESUS ​​’.

THE MYSTERY OF JOHN IS, THEREFORE, ONE OF THE MAJOR MYSTERIES, EVEN BECAUSE HE ‘ EMBODIES’  THE MAXIMUM  MEANING OF CREATION THAT IS’: «LOVE AND HUMANITY.'» 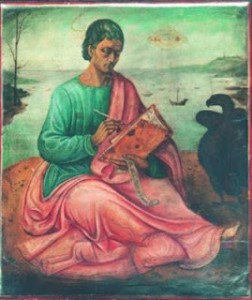 John the Evangelist is depicted in a painting of 1914, when he was on the island of Patmos, with the presence of an Extraterrestrial Space Ship.

«THE SUN, SEEN FAR AWAY FROM  THE STRATOSPHERE DOES NOT APPEAR MORE  LIKE A FIRE, BUT WITH A GOLDEN  MAGNIFICENT COLOUR. THE  LIVING BEINGS THAT INHABIT THIS HUGE ASTRO ARE NOT TERRESTRIAL, BUT SPIRITUAL, TO THE POINT THAT THEIR ACTIVITY ARE ‘NOT’ MORE ‘SINGLE BUT BINARY OF CONSCIOUSNESS ACQUIRED THROUGH THE PILGRIMAGE IN ALL THE PLANETS, INCLUDING THE UNIVERSAL SUNS. THEY ARE, IN OTHER WORDS, HEAVENLY BEINGS WHO HAVE REACHED THE COMPLETE SPIRITUAL EVOLUTION IN UNION LOVE OF TWO TWIN SOULS IN ONE SPIRIT PURE REACHED WITH THE PERFECT AWARENESS OF THEIR INDIVIDUALITY ‘AND THE RECEPTIVE BINARY ABILITY OF THE CONSCIOUSNESS OF GOD , CREATOR AND FATHER OF ALL. THESE  HEAVENLY BEINGS POSSESS THE ABILITY TO COMMUNICATE, IN CONTACT WITH OTHER SOULS IN EVOLUTION, A SENSE OF JOY AND HAPPINESS  THAT PERVADES ALL BEING.
THE UNDERSTANDING OF THESE SOLAR SPIRITS IS WIDE AND FRATERNAL. THE MIND OF THESE SOLAR SPIRITS AND ‘THE SPIRIT OF JOHN”, TO WHOM IS CONNECTED THE SYNCHRONIZED DISTRIBUTION OF THE VIBRANT ENERGY OF LIFE AND LOVE. »

THE  RENEWAL OF THE WORLD WILL BORN  IN THE SPIRIT OF JOHN.

FROM THE LAND BLESSED BY GOD, THE «GENTILES´GALILEE», WILL EMERGE IN THE TRIUMPH OF JUSTICE, THE MAIN PILLAR THAT WILL SUPPORT THE BUILDING OF THE NEW WORLD. EVERYTHING WHICH WILL NOT BEAR’ THE SUPREME LAW, ARISING FROM THE NEW COVENANT, WILL  BE PLACED UNDER STRICT JUDGMENT AND WILL PAY WITH THE SECOND DEATH. THE CELESTIAL MILITIA IS  ALREADY AT WORK AND ILLUMINATED AND SUSTAINED BY THE POWER OF THE HOLY SPIRIT. THE BLESSED ONES,  SCREENED AND TESTED, BORN AND GROW FORTIFIED IN THE SPIRIT TO BE WORTHY HEIRS OF NEW PEOPLE OF GOD AND HIS HEAVENLY KINGDOM ON EARTH. JOHN´S SPIRIT, COMFORTER AND MESSENGER, HAD ALREADY SPOKEN ON THE SIN OF NOT HAVING BELIEVED, AND ABOUT THE END OF THE WORLD. OPEN YOUR EARS AND EYES  WELL IF YOU WANT BE PUT ON SALVATION.WOE TO YOU, DEGENERATE AND UNGRATEFUL CHILDREN, BECAUSE IN TRUTH  I TELL YOU: «YOU WILL BE BEATEN AND EXILED FROM  THE KINGDOM OF LIGHT UNTIL YOU FOLD UP YOUR BACKS TO THE SUPREME GOOD OF JUSTICE, LOVE AND PEACE OF THE TRUE AND ONLY FATHER: GOD.»

THE WITNESS THE DISCIPLE THE MESSENGER.
THE WITNESS OF THIS  APOCALYPTIC TIME

AND THE GLORIOUS FATHER

BOTH THIRSTY  OF JUSTICE.
Philip Bongiovanni

http://solexmalidiomauniversale.blogspot.it/2012/05/era-stato-tutto-pronosticato-e-il-iv.html
It had all been predicted and the fourth secret of Fatima …