To whom is useful Terrorism?

In relation to what happened today in Paris:

I HAVE WRITTEN ON NOVEMBER 5 th., 1982
TO WHOM IS TERRORISM USEFUL?
IT´S NOT NECESSARY TOO MUCH INTELLIGENCE TO UNDERSTAND TO WHOM IT CAN BE USEFUL.
YOU ONLY NEED TO MEDITATE, DEDUCT AND SO DETERMINE TO HAVE, WITHOUT A DOUBT, THE CLEAR AND UNEQUIVOCAL RESULT THAT TERRORISM TRIES TO INTIMIDATE TO THIS OR OTHER PEOPLE, A CHOICE FORCED BY A POLITIC BASED IN SATISFY THE DARK INTERESTS OVER WHICH THE POLITICIANS, ECONOMISTS AND FINANCIERS OF THE TWO SUPER POWERS THAT DISPUTE, WITH ALL MEANS, THE DOMAIN OF ALL HUMANITY.
AND HERE IS WHY THE GENOCIDES, FAMINE AND THE VARIOUS WAYS OF MORAL AND SOCIAL DEGRADATION WHICH FERMENT ALL OVER THE WORLD, CAUSING DEATH EVERYDAY AND A TOTAL OBSCURANTISM OF THE MOST BASIC HUMAN RIGHTS.
THE TRUTH IS THAT THE POWER IS DRESSED BY THE BLOODY  TYRANYN AND OF UMPRECEDENT VIOLENCE ERADICATING, DAY BY DAY,WHAT REMAINS OF THIS DECREPIT AND DYING TREE OF LIFE.
SORRY, BUT I HAVE THE CORAUGE TO SPEAK
Eugenio Siragusa

THE MONSTROUS BRAINS THAT GOVERN THE WORLD

We know who are and where are the supervisors or programmers of your offensive and painful political, economic, scientific and war events, . The tensions and violence are inspired by precise calculations arising from brain drain supervisors or programmers in possession of the two major powers of your Planet.
From these Institutes depart corrupting forces involving men and peoples to put at the service of a strategy whose effects were a priori. Corruption is the common denominator that develops the value of the desired force for a wanted goal . We have the possibility to observe very closely the plans of these Institutes with absolute powers and with unrestricted availability of resources. The conquest either than a political economic or scientific power, depends on the approval of these supervisors or programmers. A revolution or a cold war or hot as it is, comes from these programmed, fermented and developed.
Their power of corruption is devilishly corroborated by an enormous amount of money or privileged concessions of power and domination. Corruptible men are their best collaborators to grant assistance, protection and security of movements in every sense. If the programmer decides the killing of a Head of State, this cannot be avoided, it has to be done. On your planet is used to say: “The goal justifies the means’. The supervisors already know the goal when they decide to ask the programmer the means with which they must act in order to achieve the aim, the goal that has been achieved.
We have elements and sufficient knowledge to be able to act in the right moment and undermine the foundations of this pernicious evil. As we have said many times, our forces are vigilant. We are waiting for a certain process develops according to the plans of divine Teachers who guide us and sustain us in this work of love and universal justice. Our operators on Earth are many and faithful in their mission. Try to arrange because nobody will be given to know the day and time of our intervention. The truth is that this will happen certainly and liberation will be sure.
Peace be with you all.
The Cristal-Bell
Woodok from the Crystal Bell 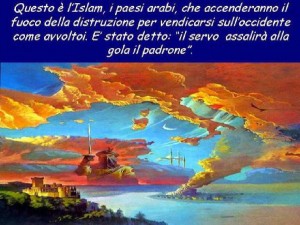 Eugenio said, in relation to Bruce Pennignton painting: «This is the Islam, the arabic countries, which will start the fire of destruction to revenge over occident as vultures. It has been said: «The servant attack the threat of the boss». 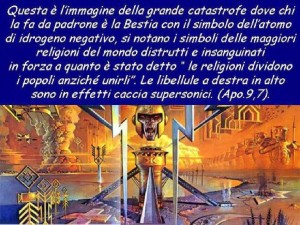 This is the image of the great catastrophe where who is the boss is the Beast with the negative hydrogen atom symbol, you can see the symbols of the major religions of the world which are destroyed and bloody in order to what has been said: «the religions will divide the peoples instead of joining them». Dragonfly on the top right are the effects of supersonic weapons»             Comment of Eugenio Siragusa about Bruce Pennington painting n°2 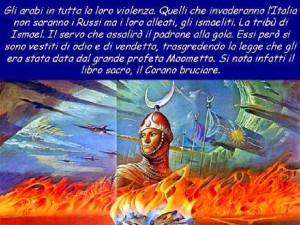 Arabics in all their violence. They will invade Italy, they will not be the russian but its allies, the ismailitis. Ismael Tribe. The servant will attack the throat of the boss. They are dressed of hate and revenge, transgressing the laws that have been given to them by the great prophet Mohammed. It shows in fact the holy book, The Koran burning.