-I would not and would never have wanted to repeat … what Eugenio had to say during the times and which was announced by Himself …. DARKNESS HAS COME ON  EARTH … !!
Times comes and goes without making a change, where men are increasingly unhappy protagonists and architects of their destiny …
The message of Fatima ever more timely … nourished by the Purple with the daily scandals they produce, and by the apocalyptic events in turn caused by man …
Young people, adolescents, children wrapped in vortexes with no exit and sacrificed on the altar of a society that is increasingly blind and deaf and increasingly poor, in every respect, and above all to listen to the heavenly calls and prey to the most blasphemous delusions
– Read and see …
«FROM HEAVEN TO EARTH»
IF YOU DO NOT RECOGNIZE THE WORK OF THE HOLY MOTHER MARY AND MY ANGELS, HOW CAN YOU RECOGNIZE ME WHEN I REVEAL MYSELF?
HYPOCRITES, WICKED AND HARD-NECKED!
BUT I WILL RETURN LIKE A THIEF IN THE NIGHT AND I WILL SURPRISE YOU, SHAKING EVERYTHING IN THE WORLD, INCLUDING YOUR KIDNEYS AND YOUR HEARTS. I WILL APPEAR WHEN NO ONE IS WAITING FOR ME, WHEN YOU WILL BE TAKEN BY MATERIALISTIC MADNESS, BY THE FORNICATIONS, BY THE ADORATION OF YOUR FETISHES, BY YOUR HELL IDOLS.
THEN, THERE WILL BE NO FORGIVENESS FOR THOSE WHO HAVE NOT REGRET, NOR LOVE WILL PUT YOU IN SAFE, BUT THE JUSTICE OF MY FATHER AND YOURS.
MY MERCY WILL BE GIVEN TO ALL THOSE WHO WENT TO SHOUT IN THE DESERT AS THE BAPTIST DID IN HIS TIME, THEY WILL BE  MY COMPANIONS WILL BE EXPENSED DURING MY STAYING IN LAND; MY BROTHERS WILL BE THOSE TO WHOM I WILL DONATE THE CROWN OF THE HOLY SPIRIT AND THE MOST WANTED PREDESTINATION: “THE PARADISE”.
TO THE MALFACTORS, THE TYRANIANS, THE DEFAMERS, THE POWERFUL, THE TRADERS OF DEATH AND ORDERS OF DESTRUCTION, THE BLIND AND DEAF MINISTERS OF WORSHIP, THE SECOND DEATH WILL BE THEIR PRIZE.
FROM HEAVEN TO EARTH
Nicolosi, 28/4/1984.
9:30 am

-This is Eugenio’s heartfelt call:
The evil one spread discord and hate
You must remain with peace in your hearts and be united and strengthened in spirit.
The Master has already asked how many were those who came. «few, Master, few. Many have dispersed into the labyrinth of illusions and dissuasion.»
Close the doors, because it is true that in moments of distraction and fear they will come to knock: «Do not open!» they knew what they were doing and they also knew that he would come back like a thief in the night after having repeatedly remembered to wait with hope, to be faithful and to await his return.
Troubles are coming and tribulations are inevitable.
Evil spreads more and more and madness takes hold of the minds of men who have entered the corrupt path that leads to perdition and pain.
Many, many will be felled and trampled by the hooves of the steeds of death and destruction of the four horsemen of the apocalypse.
You, children, do not fear for the sublime love that Christ has for you, do not fear. The Comforter
Nicolosi, November 1, 1978

-So still Eugenio … who takes his cue, then, from the work of sinister figures to clarify the game of conditioning forces as they implement their plans … the subjects change, although still in vogue … but they develop and methodologies come forward that take shape in new protagonists … of evil …

SATAN WINS. LUCIFER IS SATISFIED.
UNTIL WHEN THE HEAVENLY POWERS WILL BE WATCHING?
THE REVERSE COUNT CONTINUES, AND IT IS ALSO TRUE THAT NO ONE IS GIVEN TO KNOW THE DAY AND TIME OF THE FINAL JUDGMENT OF THE ALMIGHTY LORD OF HEAVEN AND EARTH, BUT IT IS ALSO TRUE THAT THE THIRST FOR JUSTICE BURNS IN THE HEART AND IN THE SPIRITS OF THOSE WHO HAPPENLY BEAR INJUSTICE, INSANE DEGENERATION AND THE DISMISSAL OF CREATIVE HARMONY IN ALL SENSES.
IT HAS BEEN SAID: «THE LIVING WILL ENVY THE DEAD FOR WHAT THEIR EYES WILL BE  FORCED TO SEE AND THEIR EARS TO HEAR» (FATIMA 1917)
UNTIL WHEN SHOULD THE DEAD BE ENVIED?
I KNOW WITH ABSOLUTE CERTAINTY THAT THE HOLY WRATH OF THE GLORIOUS FATHER WILL SOON HAPPEN, YES I KNOW! BUT MY ANXIETY BECOMES INCREASINGLY BIGGER, MY ANXIETY UNCOUNTAINABLE, MY THIRST FOR JUSTICE IS UNSTOPABBLE. I CANNOT STAND THIS FORM AND THIS SUBSTANCE WHICH BINDS MY SPIRIT AND THE SPIRIT OF ALL THOSE WHO WISH TO BE FREE, BUT TRULY FREE TOGETHER WITH THE ANXIETY THAT TIME AND SPACE INEXORABLY ENGAGES INTO THE BODY AND SOUL.
MADONNA ROCK AND OTHER DEMONS OF THE ANCIENT SNAKE DRAG SOULS TOWARDS TOTAL DISSOLUTION.
SATAN SATISFIES EVERY KIND AND EVERY FORM OF MATERIALISTIC PHYSIOLOGICAL DEGENERATION. LUCIFER DOMINATES THE SPIRITS, LEADING THEM TO THE SECOND DEATH. THIS IS THE TRUTH TODAY!
THE SAVABLE? I AM SERIOUSLY WORRIED ABOUT THIS. FOR THIS REASON I NEED SILENCE AND  ABSOLUTE MEDITATIVE STRENGTH ..
GOOD LUCK TO EVERYONE. EUGENIO SIRAGUSA
Nicolosi, July 11 th.,  1990
The Witness, The Disciple, The Messenger.
The Witness of this apocalyptic time
and the Glorious Father both thirsting for Justice.
Filippo Bongiovanni
Insights:
http://pesolex.com/…/la-profezia-di-suor-lucia-lo…/
Final clash 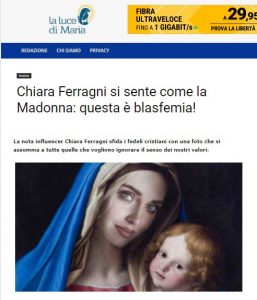