The Heads of State, the religious leaders and the peoples of the earth all under a severe judgment ..!

-It is not at all surprising to read, the news that appeared in the press of a transoceanic country, regarding the affirmation of the president of the united states … But beyond the grotesque declaration, if so, we are fully convinced that D. Trump he could more logically have received God’s invitation to go and read agrain what was said  time ago … through Eugenio Siragusa …

THE NECESSARY TO ALL, THE SUPERFLUOUS TO NOBODY!
This is our Law!
We know very well how difficult it is, for you terrestrials, to accept this order, but you will be forced to have to meditate and deduce it a lot, and therefore to determine the Law that allows all living beings on your Planet to have the necessary, abolishing the superfluous, which is the waste of natural resources and the impoverishment of the wealth of all mankind.
This sense of conscious responsibility must prevail for Justice and for Love, overcoming the obstacles that stand in the way due to the hypertrophic selfishness of the few to the detriment of the rights of the majority. Poverty and hunger are stimulants of criminal practices and deleterious vices.
The relative Good for all, without exception, is the most effective and most logical method to prevent degeneration and hatred and to endorse a process of true peace among all men on Earth.
It is not difficult to institute and put into practice this Universal Law, it is not difficult if Good Will prevails with conscious awareness and with Spiritual Aristocracy.
Eugenio Siragusa
March 1974

FROM HEAVEN TO EARTH
THE JUDGMENT OF THIS GENERATION HAS ALREADY BEGUN.
THE HEADS OF STATE WILL BE JUDGED FIRST AND IMMEDIATELY AFTER THEIR PEOPLES.
NEXT WILL BE THE SEVEN CHURCHES AND THEIR FAITHFUL FOR NOT HAVING OPEN THE DOORS OF TRUTH.
THE MINISTERS OF WORSHIP WILL BE SEVERELY JUDGED GUILTY OF COLLUSION WITH THE POWER OF EVIL. THE PLANET WILL BE TURNED UP BY FIRE, WATER, AIR AND EARTH THAT WILL BECOME WRATHFUL AND DESTRUCTIVE. THE WAR WILL DIVE IN EVERY PLACE, SOWING DEATH AND DARKENING THE SUN. IMMEDIATELY AFTER THE THREE DAYS THE HEAVENLY JERUSALEM WILL MANIFEST ITSELF WITH ALL ITS SPLENDOR, HEALING EVERYTHING FOR THE IMPERITURE JOY OF THE BLESSED WHO WILL INHERIT THE NEW KINGDOM AND THE NEW HEAVEN.
From Heaven to Earth
Eugenio Siragusa
Nicolosi, June 20, 1991

LISTEN!
It is only the beginning of the John Apocalypse ..! The worst is coming for this adulterous and wicked generation!
Fire, water, air and earth will shake everything up to take away the possibility of living.
Certainly the Glorious Father will keep all those Living Spirits who will deserve the New Heaven and the New Earth. (*) HIS DIVINE JUSTICE WILL BE STRICT EVEN FOR THOSE WHO BELIEVE THAT THEY HAVE SERVED HIM. He knows, and men know it too, that deception is worse than betrayal.
It remains for you to observe how much, beyond this time, will happen in confirmation of what the Father said: «I repent of having created man; I will destroy the beings who do not deserve My grace».
Eugenio Siragusa
Nicolosi, 5 August 1998
12:00 hs.

The Witness of the Eternal Present:
Filippo Bongiovanni

Attachments:
– From the international press

https://www.christianpost.com/news/trump-says-he-spoke-to-god-about-economy-and-reveals-god-will-help-him-rebuild-it-again.html?fbclid=IwAR1qLZT4CVG7UpVNdZ2wlkQ8-jV8qKNahewaxLvBjcxUtX1K-VA_QG-A8DE
D. Trump … reveals that he has «talked» with God about the current economic situation in the United States due to the coronavirus crisis …
God would have told him that he will «help» him so that he can build
the largest economy in the world … 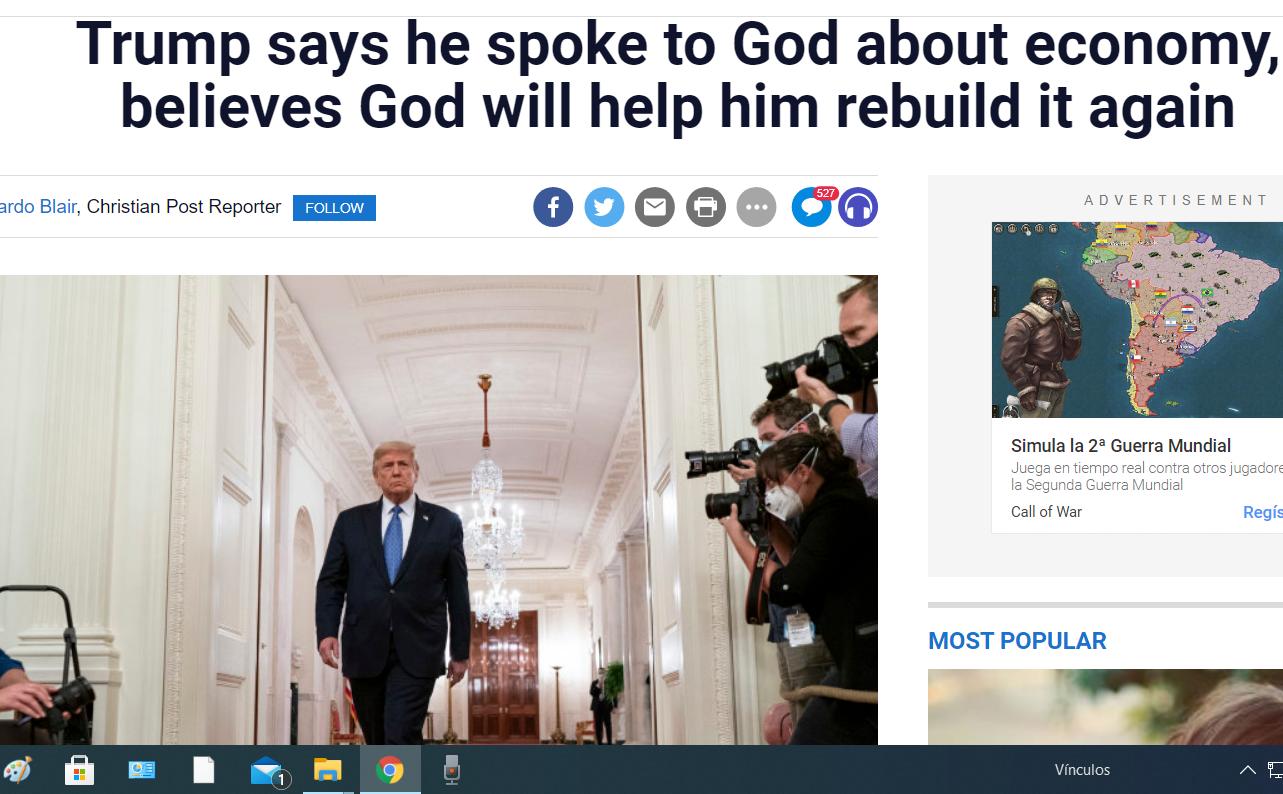